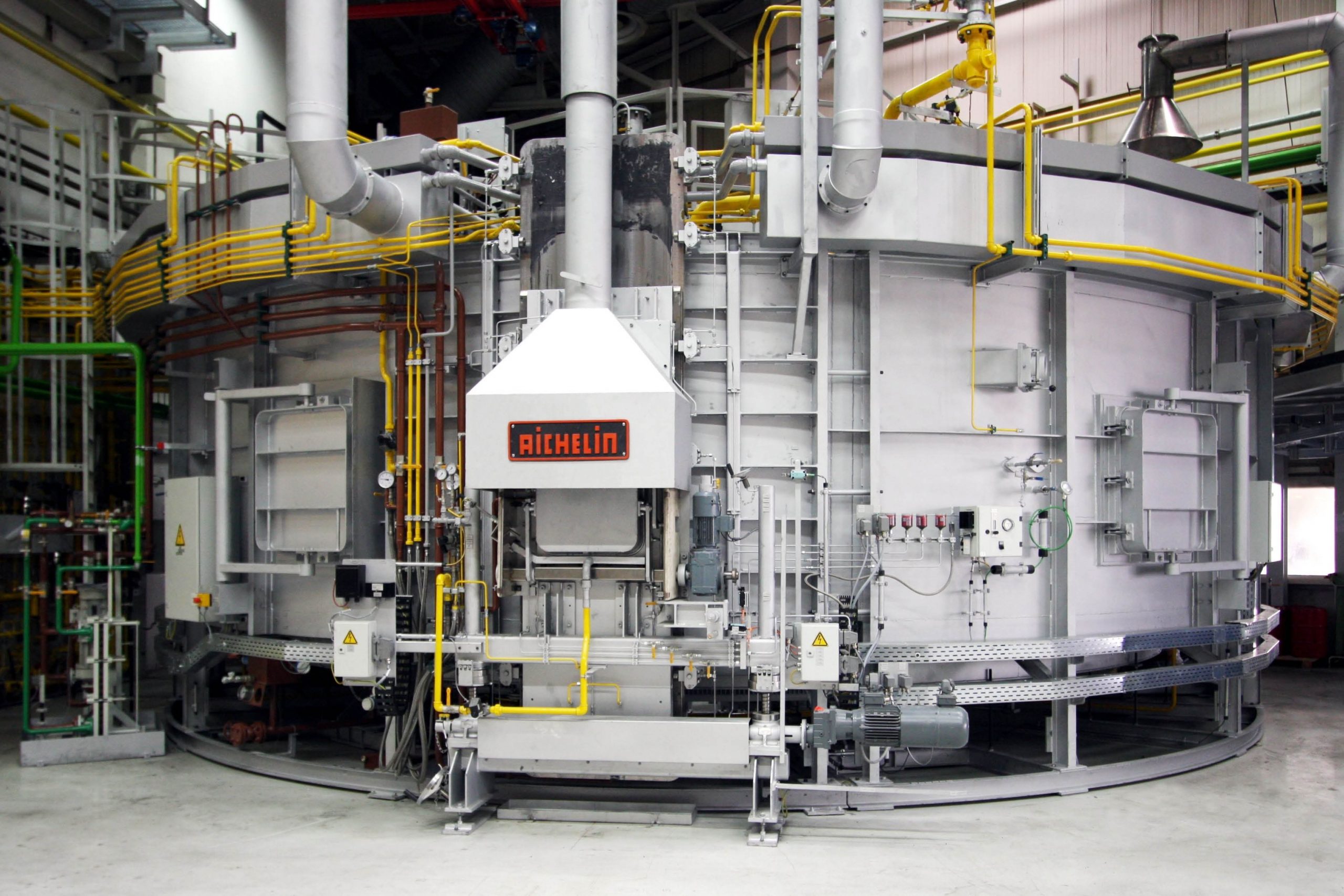 Every software implementation has its own individual requirements and specific situations, and yet the challenges to be overcome are often similar. Therefore, the possibility to draw on experience can be a decisive advantage. Patience and perseverance are also beneficial, because the introduction of a service management system is not a sprint, but rather resembles a long-distance run.

Setbacks cannot always be avoided over longer distances. A story at AICHELIN Service GmbH (ASG) in Ludwigsburg shows that it pays off not to resign immediately in case of a misstep. ASG is part of AICHELIN Holding GmbH, a globally active company that can look back on a history of almost 150 years and is today one of the world’s leading manufacturers of heat treatment equipment.

The objective of cross-location planning
While the production of industrial furnaces was transferred to AICHELIN Ges.m.b.H. (AMD) in Mödling near Vienna in 2004, the after-sales area was concentrated in Ludwigsburg, Germany, in addition to the Mödling site. Since then, the services for AICHELIN Group thermoprocessing plants in Europe have been coordinated from there. In order to meet the constantly growing requirements and to enable planning across locations, a service management system was purchased ten years ago.

However, the software solution selected at the time did not achieve the desired improvement in customer service processes. Service Manager Frank Tuminski, who has been working in Ludwigsburg since 2009, remembers: “We were not satisfied with it because the scheduling was very complex to operate and it didn’t really work well on the customer management side either. Even after three years, adjustments were still necessary”.

And while the data at the service control centre in Germany was entered into the service module mentioned above, the planning at the colleagues of the other sister companies was only partially carried out using this module. Information was merged from different systems and passed on via telephone and e‑mail. Documents were only sent by mail, an error database did not exist.

Aichelin Service – Service Manager Frank Tuminski
A difficult situation. A lot of money, time and nerves were invested when the software was introduced. Despite the unsatisfactory performance, the staff, who had just got used to the existing system, was not particularly interested in starting the introduction and learning processes all over again with a new software solution. Especially since there was no guarantee that such a next solution would deliver what its providers were promising.

Comfortable and intuitive Resource Planning
This requires real persuasion, and this can best be done by someone who is convinced of an alternative solution himself, because he has already had good experience with it. Frank Tuminski has been familiar with the Service Management System of Innosoft GmbH since 1997 from a previous employer and has also introduced the software at the company where he worked before ASG. Together with a colleague who had also got to know and appreciate the software earlier, he therefore proposed Innosoft’s service solutions for a new start in 2013. “I knew that the scheduling software was very comfortable and intuitive to use and also easy to learn.”

A direct comparison also helped in this decision. While a colleague processed a task list with ten service assignments to be planned with the old system, Mr. Tuminski entered the data with a test licence from Innosoft. “When I finished my planning, the colleague was just starting the third planning. After one hour he was ready.” Last doubts could be cleared up with a visit to Mosca GmbH, where the Innosoft system was presented to some AICHELIN employees in productive operation.

Uniform data exchange with ERP system
In the meantime, the system has been implemented at all the AICHELIN locations with service areas. In addition to the central coordination centre in Ludwigsburg, these are mainly the business units in Mödling (Austria), where the industrial furnaces are planned and manufactured, and EMA Indutec GmbH in Meckesheim, the group’s specialist for inductive heating and hardening systems. Uniform data exchange with the proALPHA ERP system used throughout the company is ensured via a standard interface.

In the end, the goal of cross-location service planning was achieved. Mr. Frank Tuminski and his colleagues in Ludwigsburg coordinate 80 service technicians, 25 of whom are our own fitters, in the service planning department. In addition, however, when there is a personnel bottleneck, they can also call on 15 other technicians from Mödling. “Our service technicians are deployed worldwide, but 80 percent of the work takes place in Europe,” explains Mr. Tuminski.

In Ludwigsburg, they also take advantage of the opportunity to plan service calls in a route-optimized manner, because most of the routes are covered by car anyway and the technicians have their first-class tools – from measuring instruments to burner setting devices – which they need for the complex industrial furnace systems, gas burner systems and induction heating systems always with them anyway. As far as spare parts are concerned, AICHELIN “is so professionally organised that we can deliver any part in stock to the customer within 24 hours within Europe.”

Confirmation of service reports ready for invoicing
Spare parts sales and central warehouse are also located in Ludwigsburg, as is the conversion and modernisation department with its own designers and automation engineers. The company’s own technicians are also equipped on their notebooks with Innosoft’s Mobile Field Service and signature pads, so that they can report back their receipts to the head office ready for billing directly after the end of the service assignment. 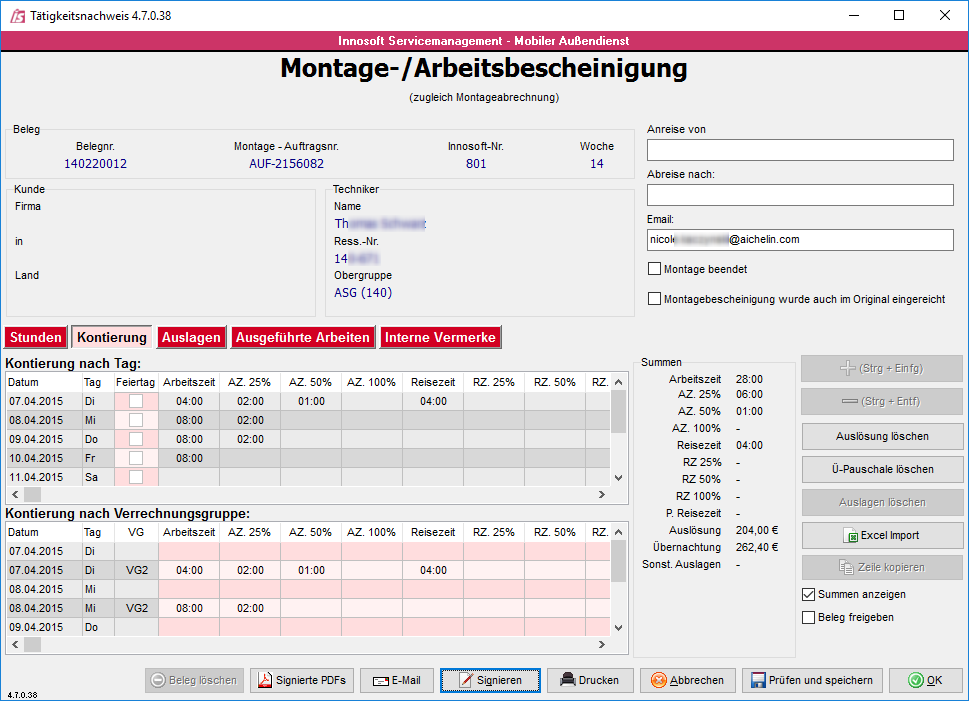 The second attempt to implement a service management system has thus proved successful, as Tuminski confirms: “We now have a much clearer and faster resource planning and thanks to the connected document management system nothing is lost, orders are stored directly with the assignments. All documents are available at hand, every colleague can view all relevant information, which is particularly beneficial in the interaction between the modules Resource Planning and Mobile Field Service. These are just a few of the features that make our lives so much easier.”

About AICHELIN Service GmbH
The AICHELIN Service GmbH in Ludwigsburg is, in addition to the service location in Mödling (Austria), the headquarters for all services on thermo processing plants of the AICHELIN Group, as well as on plants of other companies. The Ludwigsburg site also houses the central spare parts warehouse with shipping logistics and the control centre for the scheduling of service technicians. With around 70 engineers, technicians and logistics specialists in the office and in the field, AICHELIN Service provides its customers with services such as repair, preventive maintenance (especially annual maintenance), conversion and modernisation, inspections and tests, spare parts service, but also with training courses, seminars and individual training, as well as consulting.

About the AICHELIN Group
AICHELIN Group – with its manufacturing companies AFC-Holcroft, AICHELIN, EMA Indutec, SAFED, BOSIO and Noxmat – Is a leading supplier of high quality equipment and systems for heat treatment solutions such as industrial furnaces, induction hardening plants and industrial gas burner systems. The service and support sector is completed by the companies AICHELIN Service, Atmosphere Heat Treating and Austemper. The company’s roots go back to 1868.

With a turnover of 200 million euros and 1,100 employees, it is now one of the top 3 companies for heat treatment worldwide. Berndorf AG is the owner of the AICHELIN Group. With its headquarters in Mödling near Vienna, the AICHELIN Group has a strong presence in Europe with subsidiaries in France, Germany, Slovenia and Switzerland. Its global presence includes subsidiaries and branches in China, India, Russia and the USA, as well as a sales network in 22 countries.